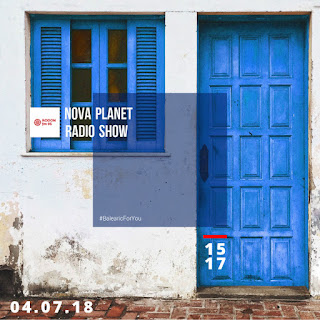 15.17 Nova Planet Radio Show Playlist @ 04.07.18
◉ When it's lazy ''under the afternoon sun'' the better you can do if you are far from the seaside is take a rest while the temperatures are touching red... And to listen this week's Nova Planet RadioShow which is lazy moving between ambient sketches of organic tunes, at least on the first minutes of the show. Tones of recent releases and few classic ones in the second half of the show. We have a new TRACK OF THE MONTH, dub this time, a tasty cover of ''You Keep Me Hanging On'' by Dubblestandart. Its Emancipation Dub sounds so Balearic, better Balearic Beat. It's 30 years since the summer of love and the Balearic Beat, why not to celcebrate with contemporary extensions of it that may DJs in the White Island may played back in the day? CheapEdits from Greece and their release on Musc For Dreams was the inspiration for the show's photo. So Mediterranean and Balearic For You.

DON'T FORGET every morning from 06:00-08:00 GMT+2 ‪
‎Balearic‬ Panorama curated by me ON AIR/Online via www.rodonfm.net