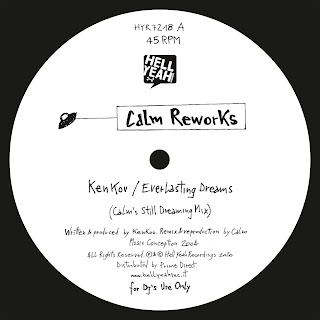 After releasing Calm's diamond piece album ''By Your Side'', Hell Yeah Recordings has been re-conceptualized by unique Japanese producer's sound as it comes around as one of the most Balearic-esque from the land of the rising sun since the millenium. Having its sound as its template from the east and following its principles to expect the unexpected is preapring a lot of suprise for the eclectic and sophisticated Balearic community. This upcoming DJ only release included his sought after CALM's Still Dreaming Mix od Kenkou's ''Everlasting Dreams'' which appeared to be re-played a lot by some of the greatest Balearic heads of the world. The Remix is epic long and from its ambient-drone introduction evolves into jazzed track which continues into a gentle bossa influenced deep house one. Its classical guitar can be easily compared with Mediterranean originals. On the B Side you may discover like me a never heard before Japanese pop tune that armed by soild and deep house rhythm with intoxicating house music weirdness which connected with nu-disco crisp merge. It is another MUST HAVE by the Italian centre of our Balearic world. - DJ Nova, Balearic For You **