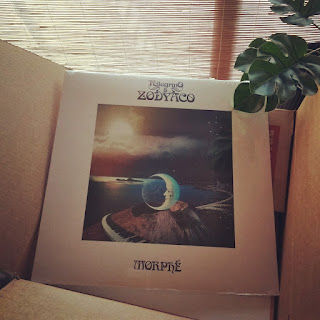 ◉ It's another killer LP from the slops of Vesuvius and like another Italian album on the top of pops on Nova Planet Radio Show this year. Itstitle ''Morphe'' and the opening track ''Napoliterranea'' are two words that are sayin' all. Napolitans, progeny of ancient Hellenic culture can't have a temperament different than me and their music always to touch me less than this. Since the eighties and before - as i was diggin' later - the outstand boogie and jazz funk sound of Napoli and beyond has that magic Mediterranean temperament, the Napoliterranea... There's much to admire on this star creature LP which is a reminiscent of the halcyon days the genres above but sound so organic, fresh, uplifting, feel good, sexy and like wanna see Pellegrino and his band LIVE! as soon as possible. When ''Intrasatta'' is playin' is like having the band in your place. The synth fusion, Italian disco (not Italo Disco) sound of closing ''Ue Uaglio (Via Da Qua)'' will uplifting you, the electrified and percussive boogie (almost modern funk) ''Amaremai'' will make round in your mind, even you know Italian or not, so catchy, so tropicaterranean, so close to Piscopian, to the constellation of Tullio Di Piscopo. The emotional disco oriented jazz funk of the 7'' teaser is here on LP version, the super funky ''Nun Fa Niente'' is will be your desire on a 7'', a heavy piano and guitar driven disco full of Mediterranean funk, ahead Afro-Balearic funk. I have not forget to mention the Napoli Segreta influenced 'Tanta Gente'' which has a slice of French boogie on the rocks. Words are not enough. It's another delight release on Early Sounds catalogue, a double20 must have. - DJ Nova, Balearic For You

** We love to 'supply' future Balearic classics For You...